Reactor Halls E07: I am the Live Warrior
Studio A2, Nottingham
Saturday 25 January 2014 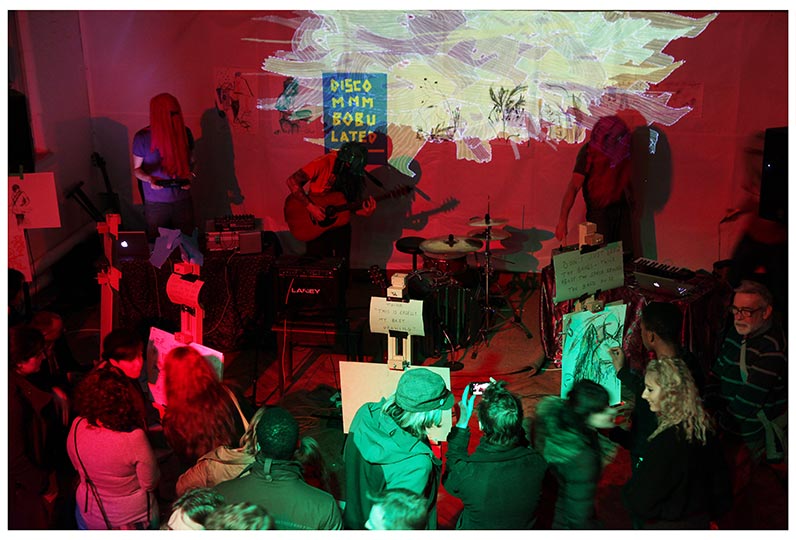 ‘I am the Live Warrior’, curated by Juneau Projects for collective Reactor was the latest in a series of experimental events titled ‘Reactor Halls’ set within Reactor’s premises in a former primary school in Nottingham. Conceived as part gig and part live-drawing session, the evening sought to bring together the worlds of music and art to offer a space for play and interaction across forms of expression.

To this end, easels, drawing boards, clay, pencil crayons, paint, chicken wire and pipe-cleaners shared the space with guitars, drums, a keyboard, several laptops and other electronic music paraphernalia. Two distinct sets of equipment; two distinct frames of reference. Over the course of the evening these objects were animated by the assembled audience members, and acts Alex Juno (Elmo Sexwhistle) and Swoomptheeng.

It began with a set of instructions. The audience were invited by Ben Sadler and Philip Duckworth, aka Juneau Projects, to draw, make and create in response to the music being played, and these works were displayed and shared during the evening’s entertainment. The audience was told there would be a prize for the best artwork of the night: a small wooden Juneau Projects sculpture, and were specifically asked to consider, ‘how your eye is going to act with your ear.’ The word act set off, for me, a chain of questions relating to looking, listening, responding and reacting, whilst all the while remaining attuned to stimuli operating across the senses: an ambitious request.

As Alex Juno took to the stage he cut a lonely figure. This effect was heightened by the fact that the audience drew him intently, peering from behind their easels to study the way he held the microphone in a particular way or contorted his face to reach a high note. The music he played on keyboard and guitar was layered with mournful tones, loud, and sliced through with scratched sounds and digital glitches. Juno’s set also incorporated familiar sound effects from Super Mario and other gaming references which worked in tandem with the animated projections behind him.

As his music drowned the space with sound, drawings and paintings were pulled forth from the audience. Tentatively, portraits, self-portraits and other aspects of the environment were recorded and expressed via the provided art materials. These flickered and shifted as the audience worked their drawings up, editing gestures, amending lines and settling into the most comfortable positions they could find in the cramped school hall. The drawings radically changed with the stage lights. One spidery self-portrait, in particular, transformed its entire aesthetic every few seconds according to the coloured lights that rhythmically highlighted or occluded lines drawn in neon shades of pink and yellow. The session was discordant, chaotic.

The second half of the evening’s music was provided by Swoomptheeng. The group dynamic of the band seemed to invite more collaborative studies from the audience during the later part of the evening. The ‘surprise drinks tombola’ may have helped with this. The music played in this set was more energetic, more rhythmic and warm, with a huge range of references from reggae, carnival, rave and even a lullaby-like quality to their more mellow tracks. The band’s playing was hypnotically accompanied by the free swinging movement of the masks they wore, fashioned from strips of cloth like colourful facial dreadlocks set with small eye goggles. These masks gave the band members the freedom to leap and dance wildly, and the audience began to respond intuitively through dance and drawing, as well as moving into making more three-dimensional work.

Clay was a particularly popular medium. Giant noses were sculpted and attached to beer bottles, portraits of Swoomptheeng were constructed, and woollen facial hair was spun and attached to mouths, chins and eyes. The music and the audience’s art was brought together via psychedelic animated projections of the playful Swoomptheeng characters, infectiously bobbing and jumping across the space much like their real-life counterparts. The ability to produce a tremendously cohesive cross-disciplinary experience from such a diverse range of influences was impressive and enormous fun.

At the end of the evening, after the works had been attached to the walls and the back screen, an award was given to an audience member for his sustained effort in producing an impressive body of work in a variety of media. The audience was told, however, that everyone had ‘passed’ and could now proudly describe themselves as having a ‘Level 4 in Life Drawing.’

On another level, the gentle prodding of the very notions of audience, artist, musician, curator and dancer was the real success of ‘I am the Live Warrior’. The layering of modes of viewing, making, showing, looking and listening opened up possibilities for experimentation, collaboration, interaction, participation and play. The event became a celebration of the art of getting absorbed in the creative act while simultaneously ‘performing’ this process to share with others.

Commissioned by Primary and published on this is tomorrow 6 February 2014 http://www.thisistomorrow.info/viewArticle.aspx?artId=2280