Some highlights from my exhibition reviews over the past few months …

The Bluecoat’s new exhibition takes as its subject the idea of ‘3am.’ Presented as an ‘other’ time, place and mind-set, 3am is a kind of borderland of in-between things. It is therefore fertile ground for artists concerned with issues of the night: sleep (or lack of it), sexual encounter, exhilaration, nocturnal creatures (real or imagined), loneliness and transgression, or to give the exhibition its full (sub)title, ‘wonder, paranoia and the restless night.’

This exhibition probes the nature of 3am through specific types of space: urban, rural, domestic and bodily space, as well as psychology related to this specific time. The urban space of 3am is most engagingly dissected in video works by Jordan Baseman in ‘Nasty Piece of stuff’ (2009), and Michael Palm and Willi Dorner’s collaborative work ‘Body Trail’ (2008). The former relays the tale of man who was raped whilst stepping out for air on the streets of London. The frames of the film disconcertingly flash forward in streaks of neon upon the night-time street, characterising the potential threat and danger of 3am.In contrast, in Palm and Dorner’s film, a group of young people run through the night-time streets of Vienna, making sculptures from their own bodies stacked up in doorways and pressed together in impossibly small architectural crevices. For this group, the night is a place for adventure and creativity: it belongs to them. 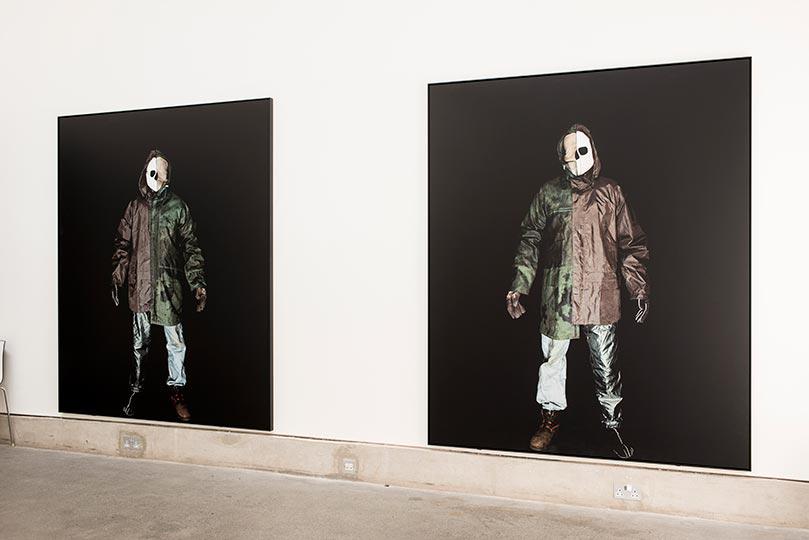 Danny Treacy, Them (2007). Image copyright the artist and The Bluecoat.

Combining something of the spirit of both Baseman’s, and Palm and Dorner’s work are a number of full-length life-size photographic self-portraits by Danny Treacy. In these, Treacy develops monstrous masked ‘characters’ from soiled clothes and other discarded garments found in the alleyways and other neglected corners of the night-time urban landscape. ‘Them #17’ (2007) incorporates a dirty brown sleeping bag, disturbingly torn open to reveal its inner wadding and worn with a mask by the artist in an apparent recollection of a body bag. Treacy’s works point toward the surprisingly rich potential of the ‘objects’ of the night, here marked by traces of night-time revellers, the homeless and other unidentifiable figures.

Artists also approach 3am from the perspective of landscape. Lucy Reynolds’ short black and white film ‘Nocturne’ (2009) focuses the lens on the unseen life of a lake within a park. Exposing her film such that it captures more than the eye alone could behold, she exposes the night in terms of the restlessness of the water’s glassy surface, the shivering and twitching of trees, and the rushing sound of the wind. Here, 3am is embodied as a time and place of exhilaration and distortion, a kind of wilderness that alters our sensory perception of the once familiar landscape. Nature at 3am exists too in the photographs of Dornith Doherty. Her blurred images depict wild coyotes in the garden of her Texan suburban home, and formally connect with Francis Alÿs’ well-known film ‘The Nightwatch,’ (2004) in which a fox prowls the closed opulent rooms of the National Portrait Gallery claiming this space for its own when no one else is there. 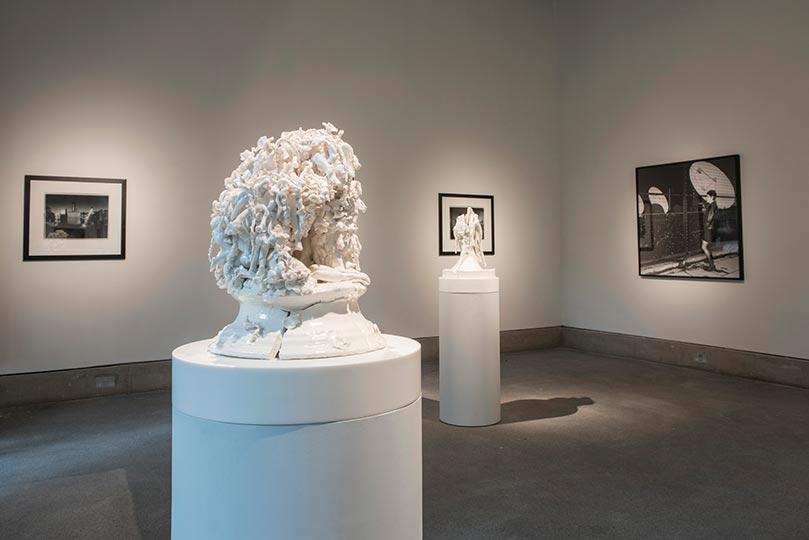 Rachel Kneebone and Sophy Rickett (background). Image copyright the artist and The Bluecoat.

The exhibition’s curator, Angela Kingston, has safely locked away the most terrifying aspects of 3am in the upstairs gallery or ‘attic.’ Alongside Treacy’s large-scale sinister ‘Them’ series, is displayed a number of small pencil drawings by Marc Hulson in which strange things occur in seemingly innocuous domesticity. The works feature crying eyes, open doorways, hallways, stairs and other classic Surrealist motifs. These investigate 3am in terms of its potential for the creeping sense of the uncanny or the outright fear of the child for the dark spaces of their bedroom. The macabre and sinister nature of these themes is overtly seen in ‘Process Art (Eat Your Heart Out),’ (2007) a large blackened bronze sculpture by Nathan Mabry. In this, a terrifying monster-monkey hybrid wearing a boxing glove rides the shoulders of a young boy. Positioned to menacingly greet the viewer as they ascend the stairs and enter the upstairs gallery, this sculpture is disturbingly effective indeed.

Artists including Rachel Kneebone and Bettina von Zwehl address the body as it might be at 3am. Kneebone’s bizarre and delicate porcelain sculptures incorporate, in an echo of Palm and Dorner, a twisted mass of limbs, both human and animal, as well as flowers and funereal pedestals. These are charged with sexual energy and captured in their frenetic movement in a beautiful nightmare of imagined 3am activity. Conversely, von Zwehl chooses to examine the body at 3am in detail and in reality. Several photographic portraits of women wrested from their deepest point of sleep show the body in abrupt transition to wakefulness, bleary-eyed and barely functioning. The artist’s white background and use of white clothing reveals the ‘ethereal’ nature of this cognitive process. The bodily struggle and psychological confusion of these sitters as they attempt to comprehend this sudden change is shown as an otherworldly or ghostly transformation: a kind of disembodiment.

‘3am: wonder, paranoia and the restless night’ is an ambitious exhibition. Its nuanced themes resonate far further than simply the studio or gallery, reaching out into the very spaces and places of the night itself: the places we all inhabit. As a junction between night and day, waking and sleeping, safety and fear, exploration and danger, and stillness and movement, 3am is a time (and place) of rich contradiction and endless possibility.

3am wonder, paranoia and the restless night
The Bluecoat, Liverpool
28 September – 24 November 2013

Published on this is tomorrow on 3 October 2013