‘Pigdogandmonkeyfestos’ is an exhibition that explores the format, content and concept of the contemporary artists’ manifesto. It does so quite intensely. Aside from the very many works that fill the walls and floor, Airspace Gallery is also regularly punctuated by short bursts of painfully loud music, coughing sounds and the cry of an unidentified animal, so loud as to make the gallery walls tremble. These sounds create an atmosphere far removed from the quiet contemplation of the gallery space. They shake things up. The works displayed are challenging, politically provocative and demanding. This is not a comfortable experience and nor is it meant to be. Despite being somewhat overwhelming, however, the exhibition is shot through with a wry humour which does nothing to detract from its political agendas. 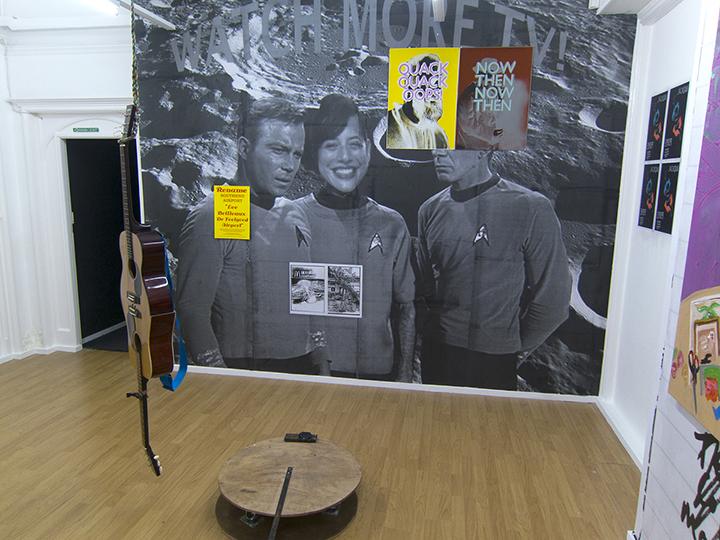 If a manifesto is usually considered to be a self-conscious written declaration of intent and a call for change, then there are text-based works shown here that fit this model. Whether in zine format (such as BAZ’s latest newsletter and ‘Schism’), large posters, or wall vinyls, slogans such as ‘Office politics wherever you are’ and ‘You Listen, You Repeat, Your Understand’ can be read throughout the gallery. A number of works by Common Culture from their ‘Tips for Artists’ series are also shown. One posits that the social aspects of Relational Aesthetics are ‘perfectly matched to the guilty conscience of the middle class.’ Nearby, in a work by kennardphillips, David Cameron’s face is burnt away, and other pieces by Billy Childish and Harry Adams equate the well-publicised recent government funding cuts for the arts with Nazism. 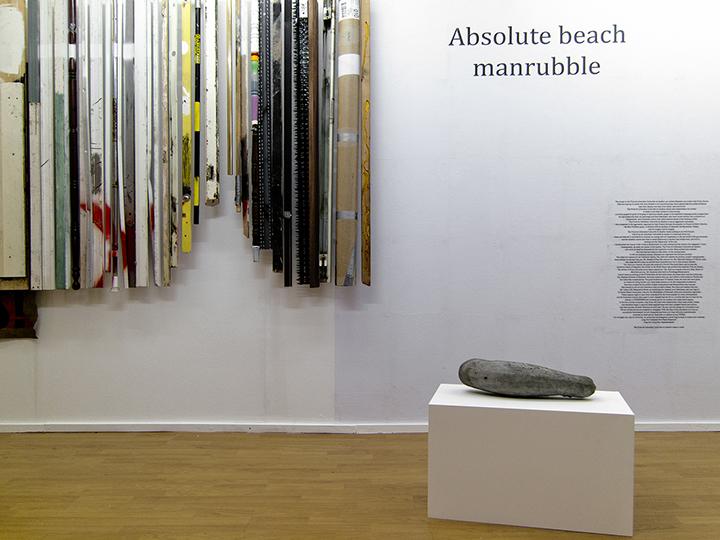 Other works take a more nuanced approach to the political, and do not necessarily fit into the category of the manifesto at first glance; for instance Sarah Lucas’ concrete sculpture ‘Man Marrow.’ Though it clearly says something about sexuality and gendered identity, it is not a ‘typical’ manifesto. The exhibition therefore introduces the possibility of various forms of purely visual work such as sculpture and abstract painting being read as artists’ manifestos in their own right.

In the back room, there is a video work by Alexis Milne and Tex Royale titled ‘The Sub Nasal Chamber.’ In this, militant alien creatures wearing what seem to be brightly coloured cricket pads, masks and shoes on their hands read subverted Tarot cards, breakdance and worship unknown entities at canal locks and ruined towers. In this distorted narrative, the video at times runs in reverse and it is overlaid with triangles that contain further fragments of footage. The viewer is warned to ‘Be aware of sub-cultural paralysis,’ but precisely how one might follow this command remains ambiguous.

Several works on paper by Leigh Clark, conversely, are particularly direct and controversial. These layer the catchphrases of two now notorious media figures from the ongoing Yewtree investigation over images of modernist artist Eric Gill. Revelations about Gill’s own sexual proclivities were published after the discovery of his detailed diaries, sparking public calls for his sculptures to be destroyed. Clark’s work questions the ways in which the cultural products of one popular figure might remain socially acceptable while others are no longer considered so, using the artist’s still popular Gill Sans typeface to inscribe ‘now then, now then’ and other all too familiar phrases on to Gill’s portrait.

The curators of ‘Pigdogandmonkeyfestos,’ artists Shaun Doyle and Mally Mallinson, have arranged the display to be read as one installation, despite it being composed of works by 43 different artists. Pieces are overlaid on the gallery walls, and these overlaps create direct connections and clashes between ideas. All the artists on show have worked with Doyle and Mallinson previously in the formation of two newspaper publications, also called ‘Pigdogandmonkeyfestos.’ Their visual and text-based conversations continue here.

This eclectic exhibition pushes the importance of individual authorship into the background and the effect is compounded by the difficulty the visitor has in following the roughly drawn galley plan and identifying individual works. The exhibition is therefore composed of many voices. There is an eschewing of certain art museum conventions and an assertion of alternative viewpoints, and these are values that, in fact, one might expect from an artist-led gallery such as Airspace. 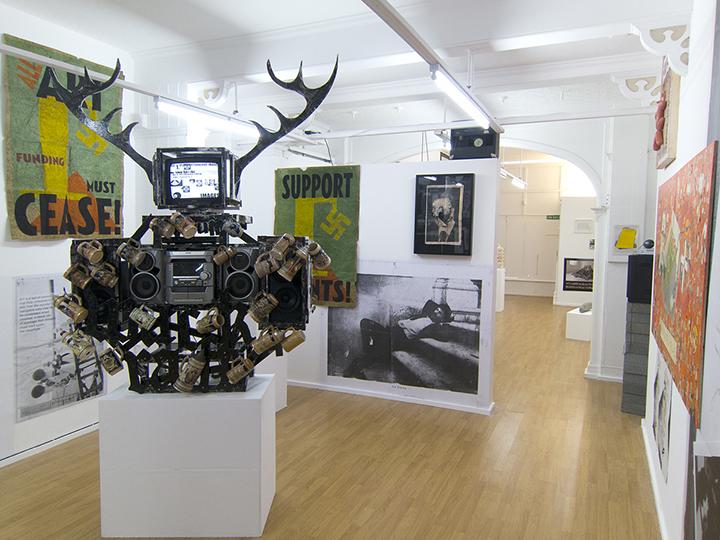 The exhibition literature states that the curators do not aim to present a genre defining body of research. Instead, it would seem that ‘Pigdogandmonkeyfestos’ offers the viewer a set of possibilities, posing provocative questions about the manifesto as a mechanism and how it might optimistically or aggressively be utilised to raise consciousness, confront a problem or enact a change in the status quo.