As a writer, I make a lot of notes. I fill pages and pages, notebooks and notebooks with my thoughts, ideas and observations. Sometimes I can even read some of these scrawls. If I’m lucky.

I came across a lovely, interesting article on the BBC recently about writers’ notebooks by novelist Lawrence Norfolk.  The article comes at a time when the British Library are making papers and notebooks from Jane Austen, Thomas Hardy, Charles Dickens and other enormously important writers accessible online.

Norfolk made a few beautiful observations about the use of a notebook for a writer. His ideas have given me a few of my own about how I might experiment and expand upon my own written practice. Some images of his notebooks are below.

‘Lawrence Norfolk’s notebooks have evolved over time.’ I wish my notes were as beautiful as this!

‘The first page of my notebook holds a column of place names, some cuneiform letters taken from a tomb in the British Library and a collection of oddly-named English meadow flowers (wet-the-bed, yellow rattle, adder’s tongue fern).

Turning the page, I find a list of books with library numbers from the British or London libraries, then caravan names (Sprite, Lunar, the Senator range) then some players of un-credited guitar solos: Eric Clapton on When my Guitar Gently Weeps, Brian May on a Black Sabbath track, a few others. Turning to the back, I write the word Letter.

I am travelling on a German train between Hannover and Osnabruck. Letter is the name of the station through which I have just passed.

The next is Haste. I write that too. What, I wonder, if the name of every station on the line turns out to be cognate with English words? What if the stations form a sentence? A paragraph?

Unfortunately, the next station is Gummer.’

He goes on to say,

‘A writer’s notebook is a junkyard; a junkyard of the mind. In this repository of failed attempts, different inks speak of widely-spaced times and places, the diverse scrawls of varying levels of calligraphic awkwardness, lack of firm writing-surfaces, different modes of transportation.

All the places a good idea might blossom into something bigger and better.’ 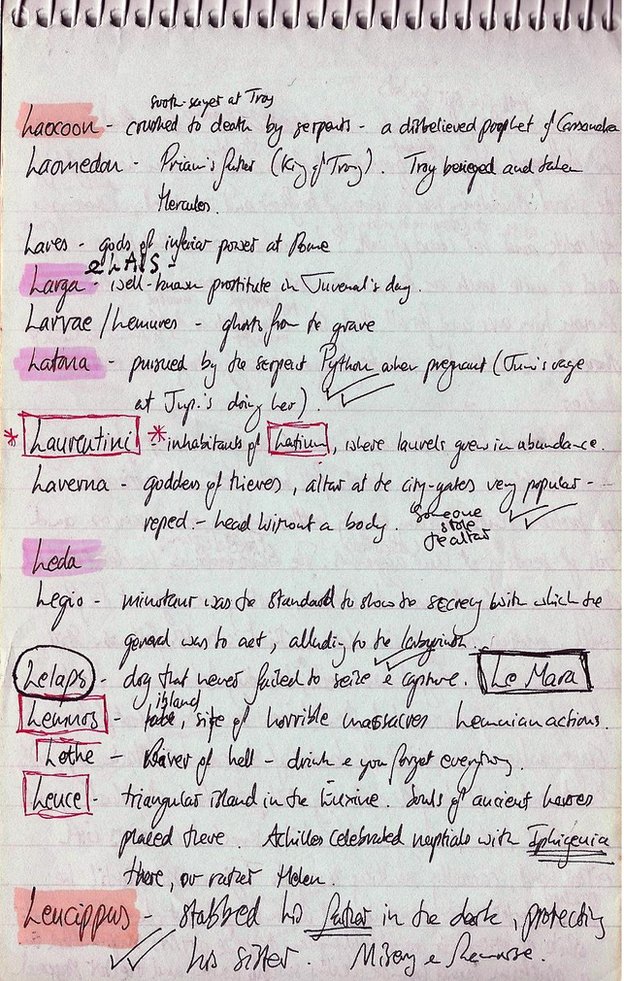 ‘The L page in one notebook annotated with colours and stars and ticks.’ Or as sumptuous as this.

‘A detail jotted down in two minutes might occupy you for the next three years. The protagonist of your next book might turn out to be the Elector-Palatinate of Gummer.

A full notebook potentially contains the rest of your writing life. Or nothing of value at all. It is transitional. Work passes through it on the way to becoming something else.’

Some lovely thoughts to consider. And to write about.