Peter Dreher’s exhibition at MK Gallery is divided very neatly into sections across three rooms. His paintings engage with the genres of landscape and still-life, preoccupations the artist has developed and refined into several distinct series of work of staggering length and commitment.

Dreher is perhaps best known for his small-scale ‘photo-realist’ oil paintings of half-full glasses of water. 146 (of more than 5000) of them are displayed here from his series ‘Every Day is a Good Day (Tag um Tag guter Tag)’ (1974 – 2012). Those works that were painted by day are arranged in a huge grid formation, and those painted at night run in single file along the length of two walls within the first room. One is struck not only by the number, formal presentation, stark beauty and technical skill of these paintings, but also their ability to poetically mark and record a sense of time passing, recalling a set of negatives or a storyboard, no matter how ‘stuck’ this particular frame might be.

Each painting shows the same glass, the same background, the same composition. However, on closer inspection, these ‘repeated’ paintings reveal a huge variety of subtleties, in particular, an array of colour within the grey tones: nuances of blue, green, pink, yellow and orange appear in the reflections on the glass and in the water. These paintings perform a meditative function for both artist and viewer, whilst the repetition of the subject in such numbers moves this body of work away from realism and into a more conceptual field of consideration. 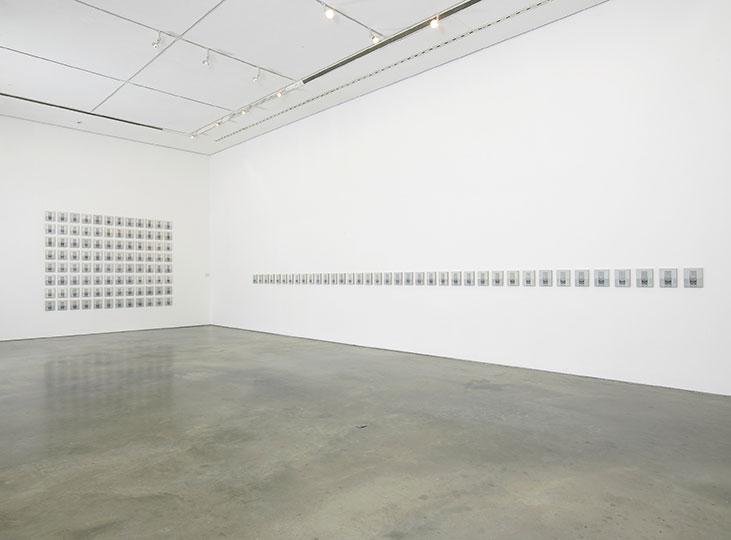 The central gallery space displays panoramic paintings from the artist’s ‘Beachcomber Series’ (2000 – 2001) along three walls. These depict not a beautiful landscape but a somewhat ordinary interior view of a Californian motel room. Split into 52 small panels, one of which was completed per day, like the glass paintings this large modular work operates as a kind of extraordinary visual diary, meticulously capturing details of everyday life through fragments of television cables, lampshades and paperback novels. It is perhaps significant to note that in an accompanying video interview Dreher similarly describes the process of painting his glasses of water in terms of assembling small detailed fragments to build an ‘illusion’ of a whole object. 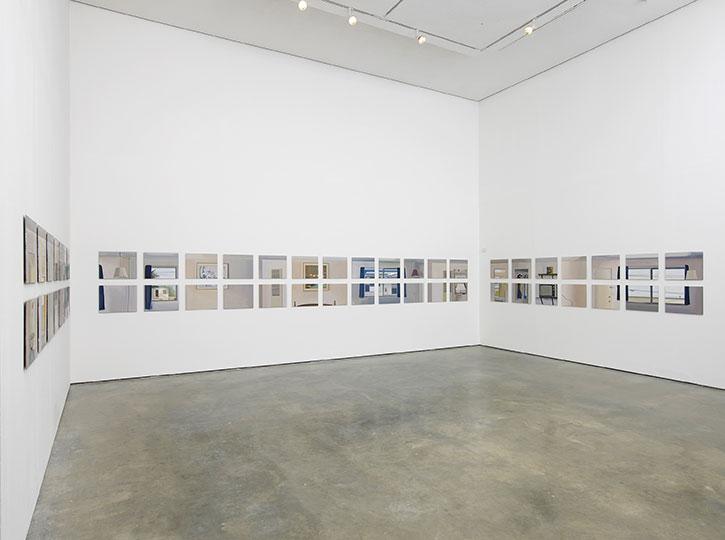 In contrast, the third space houses eight very large gouache paintings on paper featuring a repeated skull motif. These works are composed less formally, with looser, more gestural brush-marks than the tightly painted works that comprise the rest of the exhibition. Viewing ‘Skulls’ (2005 – 2007) is a far more visceral experience. Hollowed-out eyes directly meet the gaze of the viewer and the eerie, grinning forms hover over the dark grey ground, scudding along the surface of the painting like images burnt into the eyes by a camera’s too-bright flashbulb. 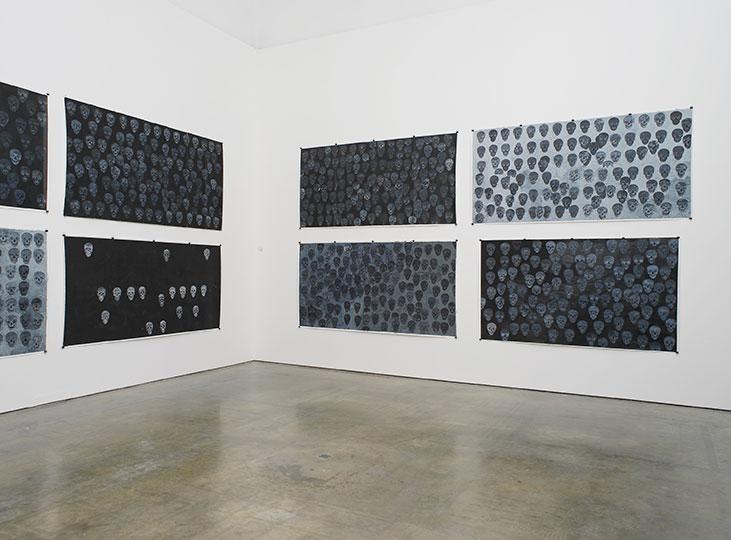 Dreher’s paintings are accordingly characterised by a simultaneous simplicity and an overload of information, whether obsessively incorporating repeated motifs or meticulously depicting a whole scene. The artist has described his choice of the glass of water as a subject as the result of wanting to paint an object which, ‘everybody in the world could understand.’ A similar poignant universality could be extended to his use of skulls. And yet despite this apparent simplicity, the paintings overwhelm the viewer with their sheer number, panoramic display techniques and Dreher’s expert handling of the medium.

Commissioned and first published by this is tomorrow 3 November 2013.