Skip to content
The Council of Community Conveyors, aka artists Mia Rushton and Eric Moschopedis (and their collaborative partner Sharon Stevens), provide the somewhat unusual service of communicating messages between next door neighbours. For Fierce Festival in Birmingham they have invited visitors to join them over four separate days, and have provided participants with yellow sashes to wear and forms on which to collect data.After a brief training period, two small groups of Council participants including myself arrive at a road in the area of Balsall Heath with a long list of houses to canvas. We are required to ring the doorbells of the houses listed and inform the occupant(s) that we are in the neighbourhood delivering messages for neighbours. We ask if there are any messages that they would like us to pass on for them as we move next door. Our starting point is simply to strike up a conversation with a stranger, while the project aims, ultimately and ambitiously, to strengthen community dialogues. 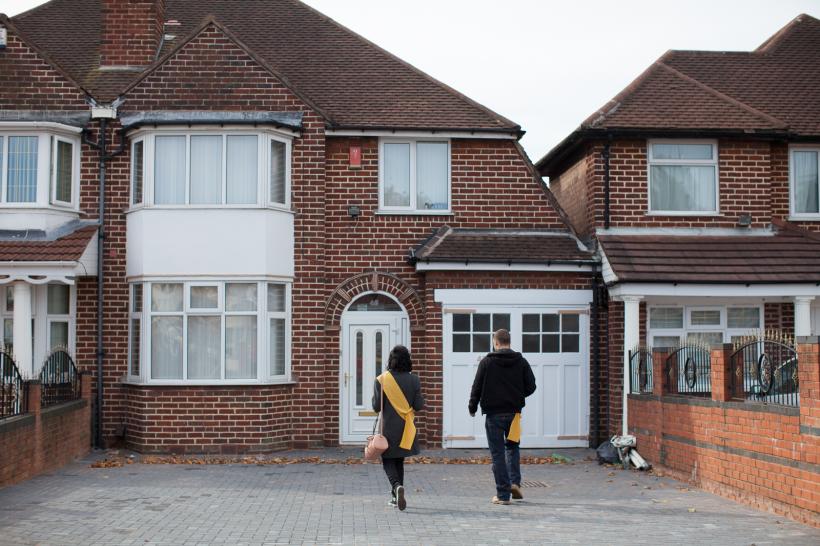 We knock on the doors of thirty four houses and offer to convey messages. When there is no answer, we post a ‘sorry we missed you’ slip through the letterbox. Front doors are opened to reveal a family hurriedly getting ready for an Indian wedding, a son who freely admits to us that he treats his parents’ house like a hotel, a group of young men dressed only in boxer shorts or towels, a woman who told us she has learning difficulties. Such encounters are unexpected, perhaps humorous or touching, but at times our presence on the doorstep feels intrusive and we leave quickly. Some people struggle to comprehend what we are doing and why. Others are pleased to tell us about the neighbourhood and ask us to let their neighbours know how much they have appreciated their help or ask us to welcome new residents to the road on their behalf. We learn that, in this street, some landlords live next to their tenants, family members live next door to one another but have no messages to pass on and that some residents are lonely. A lady originally from Barbados asked us to let her neighbour know that hearing her children playing in the garden next door over the years has made her feel less alone and part of a family of sorts.

This research is conducted modestly. Its impact is impossible to measure. Yet its value is enormous. The artists are warm and generous people who wish to begin what are an important series of dialogues between ordinary people. It is hoped that these conversations will continue after Rushton and Moschopedis have left Birmingham, and the project has been realised in several other locations. Each time the Council of Community Conveyors form microcosmic, complex snapshots of communities: their cultural and social structures, the ways that class and religion shape a home, the strength of or lack of community spirit and neighbourliness. Most significantly the project builds a collection of individual stories, albeit fragmented and partial, but true and honest and vital. And these stories are experienced by participants, both those aware that this is an art event and by each person that opens the door to us.

Commissioned and published by this is tomorrow 26 October 2014
http://www.thisistomorrow.info