Skip to content
I parked recently in a small town shopping centre car park for an exhibition opening. Exiting the closed shopping precinct after hours, its uncanny quietness, creepy sterility and oppressively strip-lit generic interior would have made it an ideal setting for a zombie television serial. Rick and Daryl were on hand to save me though, I was sure.And yet so many of our shopping centres and high streets are saturated with this atmosphere even during opening hours. Since the financial crisis began in 2008, high streets across the UK have been transformed into eerie urban landscapes through the closure and disappearance of some of our most familiar retail brands. But when once thriving shops are left empty, what happens to these places and what happens to the individuals who lose their jobs? 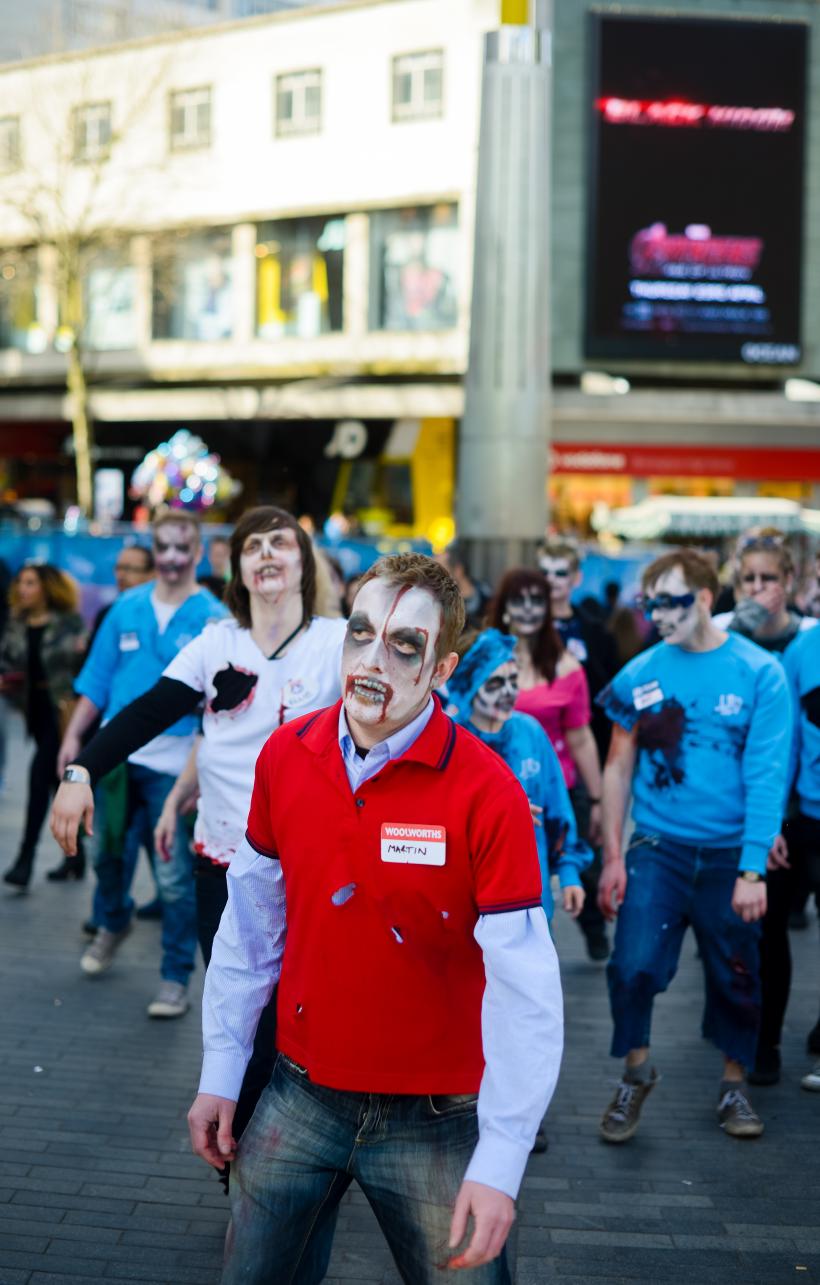 Ellie Harrison’s new performance/event asks these questions through a very specific call to action. This call, aimed at former workers of Blockbuster Video (where Harrison herself was once employed), Woolworths, Habitat, La Senza, MFI, Barratts, Phones 4U, JJB Sports and other chains, seeks to reclaim these sites for redundant workers, highlighting capitalist collapse via a performative act. Over sixty people took part in a staged ‘zombie walk’ mapping out the sites of thirteen closed retail chain stores close to Birmingham City Centre. Theatrical make-up and constructed zombie uniforms enabled ‘zombie employees’ and local zombie enthusiasts of all ages to re-visit these spaces, the spectacle of the event drawing attention from shoppers and local media alike.

‘High Street Casualties: Ellie Harrison’s Zombie Walk’ continues the artist’s research into the currency of capitalism in visual and popular culture, and the complex political and social workings of groups of people. The artist’s previous works include ‘The Global Race’ (2014) which imagined the future of elite sport as no-sweat Segway racing and the pop-up community event ‘Dark Days’ (2015) in which the Gallery of Modern Art, Glasgow was re-claimed by one hundred members of the public for a night. Other projects have explored the nature of self-employment and the effects of privatisation, and while the manifestations of these ideas vary, Harrison’s political sense of conscience is a constant driving force.

The exhibition section of the project, shown at Ort Gallery in Balsall Heath, Birmingham, displays photographic documentation and video footage of the zombie walk. Here too, are many of the torn, bloodied and faded uniforms worn by participants, complete with name badges. Scattered research materials, maps and other ephemera lend the exhibition a sense of urgency, as if this unassuming room above a community café might be the nerve centre of a major operation to bring down the system or to take over the city. Perhaps it is.

Rather than the discombobulated, murderous zombies of Hollywood and multi-million dollar television franchises, Harrison’s zombies are organised and mobilised. They carry maps and smart phones with which to take selfies for their store’s ‘team’. These images are distributed via social media channels during the walk, enabling the collected material to be disseminated within wider contexts and locations. Whether grinning or looking menacingly at the camera, these zombie images are both absurd and unsettlingly powerful, particularly as these specific places are all too familiar to a Birmingham-native such as myself. The pairing of a uniformed zombie with sites now re-occupied or boarded and weed-covered such as at Highgate Retail Park, have impact aesthetically and conceptually. These are not mindless, flesh-hungry creatures, but individuals re-appropriating the generic nature of the automaton chain store employee/zombie to make a stand against loss. The work uncovers something of the micro-impact of the collapse of retail giants upon communities, families and the actual people once at the end of a payroll number.

A film of the walk’s sites and interactions interviews an ordinary man who lost his job. Twice. He describes unemployment in terms of a freedom without tools, without relationships and without purpose. This all feels especially apt and timely given the political changes already underway that will decimate the lives of many working people.

Welcome to the apocalypse: we are all zombies now.