Fiona Banner did very little work at art college. “Next to no work,” she admits. “I struggled away with making pictures for years and years and I found it incredibly complicated,” she says.

Making art has come a little easier in the intervening 25 years – she was nominated for the prestigious Turner Prize in 2002. Recently, Banner completed an artwork that she almost made at Goldsmiths College – a video aptly titled Intermission. The artist’s largest ever solo exhibition opened at Birmingham’s Ikon Gallery in October and her output is these days rather prolific. Timing is everything. 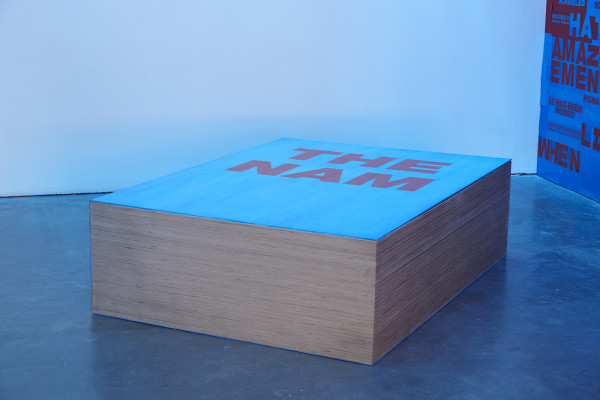 Language has been integral to Banner’s work since the 1990s. “The writing just started to come to the fore as a way through,” she explains. Indeed, one of her best known artworks is THE NAM (1997), a 1000-page book in which Banner transcribes filmic interpretations of the Vietnam War, including Apocalypse Now and Full Metal Jacket. Every action is recorded in her words. A tongue-in-cheek press release written by the artist describes the enormous book as ‘unreadable’. Writer David Barrett said THE NAM has the “impact of a comic, and yet does so without relying on pictures. You don’t read the text, the text comes out at you.” The same can be said for many of the artist’s provocative works. Interpretations of violence and military technologies through language are consistent themes.

THE NAM was the first in a long line of works produced by the artist’s publishing company, The Vanity Press, set up after her first solo exhibition, Pushing Back the Edge of the Envelope, in 1994 at City Racing, an artist-run space in Kennington, South London. Often, Banner’s editions are actual books but sometimes the objects produced with ISBNs are books without pages that cannot physically be read. “I’m as interested in the object of a book as much as the content,” she notes. THE NAM can be found in various iterations within the Birmingham exhibition. The book’s pages are pasted across the gallery walls, copies are stacked up as a kind of cardboard cut-out and the book also appears as a large sculptural block. The latter is something that the critic Adrian Searle takes credit for, having apparently once written that THE NAM is “not so much a coffee-table book as a coffee-table.” 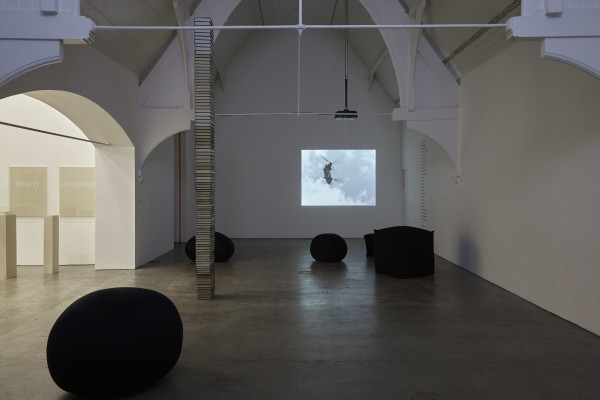 The book as an object in its own right has been reworked and rethought by Banner. She also makes life-drawing books without any pages that she describes as ‘dummy’ books. At Ikon there are works on paper printed with individual ISBNs, as well as large wall-mounted ISBNs made with eye-watering, hand-bent neon lettering. Banner has even assigned a unique ISBN to herself in a work titled Fiona Banner.

The seating that accompanies Banner’s videos of Chinook helicopters, wind socks and the encyclopaedic military aircraft books, Jane’s All the World’s Aircraft, are, for instance, artworks too. Large black beanbags take their form from the full stops of different typefaces. Previously shown as cast bronze sculptures, they now offer a series of inviting pauses within the exhibition – objects through which to think about how language is a squashy, unbalanced, physical, keenly felt thing as much as a spoken phenomenon. Another series of chairs include textual inscriptions that derive from her ‘nude portrait’ of the actress Samantha Morton – an uncomfortably intimate portrayal of the actress’ body told through words rather than images. 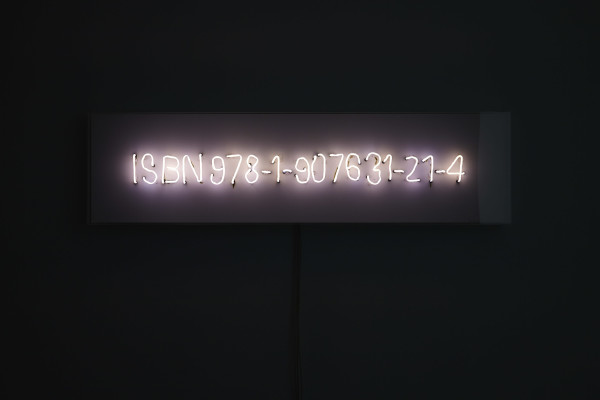 A further unlikely figure crops up in Banner’s work. Charles M. Schulz’s Peanuts gave the world Snoopy. Snoopy was all the rage when the artist was a child in Merseyside, says Banner. The 1966 hit single Snoopy Vs. The Red Baron by The Royal Guardsmen has provided a rich source of inspiration for the artist over the years. Her works of the same title bring together a fascination with historical conflict, military aircraft, humour and language. The mute character of Snoopy is for Banner “a mouthpiece” within her work, yet he speaks only through thought bubbles. Banner neatly explains, too, that the drawing of the character is “so minimal that he is like a glyph or a sign.”

The visualisation of language is vital to Banner – typefaces or fonts reoccur throughout her work. Her recent Frith Street Gallery exhibition was titled Font. A marble sculpture, Font (2015), opens the exhibition in Birmingham. The baptismal sculpture is inscribed with the word ‘font’ in a new typeface designed by Banner and also titled ‘Font’, setting out her approach to making as one that engages repeatedly with the subtleties of language. Banner’s typeface is an amalgamation of many she has “deployed” before, as a nod to the survey nature of the Birmingham exhibition, she says. She describes its lineage as “a family tree arrangement where the child of Avant Garde and Courier mates with Peanuts and Didot’s child. Bookman and Onyx mate; their child mates with Capitalist and Klang’s offspring – the final font is an unpredictable bastardisation of styles and behaviours.” As Searle remarks, “She’s a tease, that Banner.”

Banner has had, as the writer Lily le Brun summarises, “a career that has been spent considering the peculiarities, possibilities and limitations of language.” So what comes next? “The world would have us busily productive all the time. But that’s not always a good thing,” Banner says. “I’m going to try and not make any work for a bit. I’ve just made a load and now I’m going to play with it.”

This profile was produced as part of the inaugural a-n Writer Development Programme led by a-n News Editor Chris Sharratt. The text was first published on the a-n blog, December 2015.