Having graduated from the Royal College of Art last year, London-based artist Holly Hendry has won numerous awards and just opened her first solo show in a UK public gallery at Baltic, Gateshead. Anneka French talks to her about her whirlwind career so far.

Holly Hendry graduated from The Royal College of Art in 2016 and has since become one of the most exciting young artists in the UK.

Prior to the RCA, the London-based artist completed her BA at the Slade School of Fine Art.

Now represented by Limoncello, Hendry’s large-scale solo exhibition, ‘Wrot’, is currently on at Baltic Centre for Contemporary Art, her first in a public UK institution.

Speaking in the lead up to the show, she explains how she was “moving between a lot of different elements but I hope that they all work as one.”

She adds that putting the different fragments of the work together at Baltic was “like a big jigsaw puzzle that hopefully fits.” 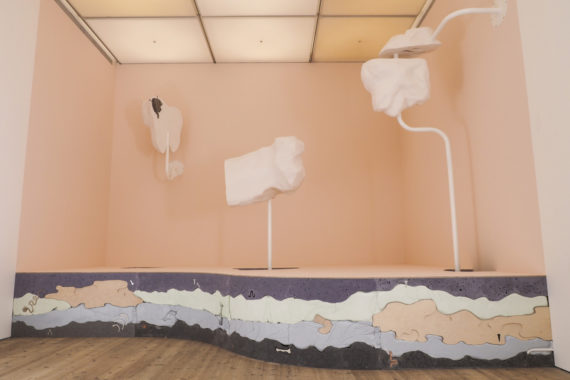 You’ve achieved a lot since graduation …
The momentum at the Royal College of Art was high and I had exhibitions during my time there. I displayed two works from the degree show at The Royal Standard’s ‘Gettin’ the Heart Ready’ (2016), adapting them to fit the spaces. I slightly adapted another degree show sculpture for Vitrine in Bermondsey. Limoncello saw the degree show and asked me to show with them and be represented by them which was a complete shock and delight to me. They’re a gallery whom I’ve admired for a long time. It feels really nice to be part of that team and it’s really exciting long-term. It’s all been a bit of a whirlwind!

How much new work have you made for Baltic?
Everything is new work. I lived in Newcastle when I was doing the Woon Tai Jee Fellowship so it feels extra exciting and important for me to be going back to Baltic.

What research is influencing the exhibition?
I’ve been thinking a lot about surfaces as borders between above and below. The ground, for instance, is a flat plane with a great depth of archaeological material beneath. I’ve been thinking about archaeological fragments being unearthed and brought back into our world for display behind glass. Such objects are shown from a very specific perspective without the capacity for touch. Skin and bones come into the show too – bones being both dense and light with hollow interior structures. 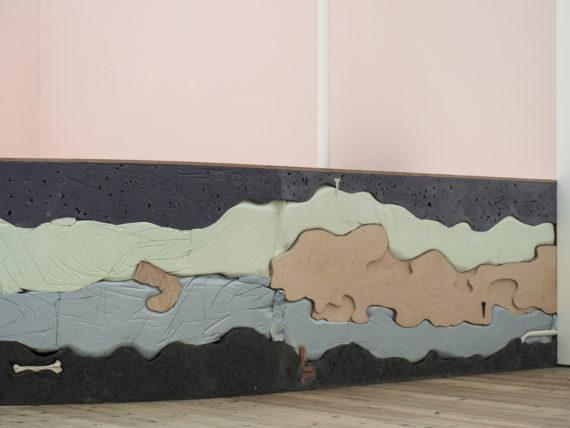 How are you approaching the gallery architecture?
My work tends to be vast and immovable and Baltic’s spaces are very high. I’ve raised one level of the space so that there are two sections, almost as if you’re at head-height with the ground. As well as a platform of striated layers I’ve got a number of big, awkward, lumpy sculptures which will be presented at height. I’m including metal frameworks for the sculptures which are a cross between public handrails and medical armatures.

Tell me about the title. The definition of ‘wrot’ is timber with a smooth-planed surface but there are a number of inferences that might be made – from things rotting to things being written?
I wouldn’t imagine that many people would know the term as it’s from the building trade. Breakdown and decay are the main aspects at play in the exhibition but these are counteracted by sugary colours and seductive forms. I wanted a darker, humorous undercurrent to the exhibition that would reference our need to prime and polish bodies – our skin and teeth. A lot of my titles use words which are ‘compost-like’ – fragmented and a bit mucky. The sculptures themselves are quite tidy so I like the titles to rough them up. 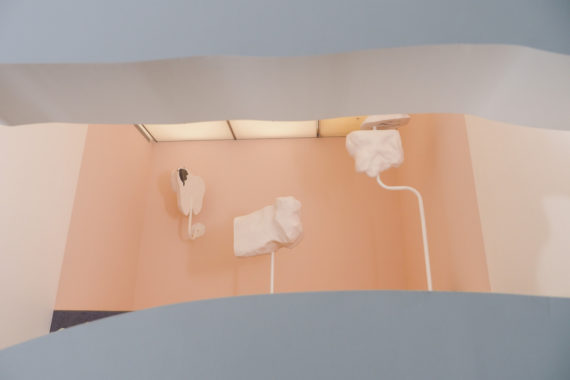 How intuitive are your working processes?
I figure out new techniques with materials. My ideas usually require invented methods. Sometimes things don’t happen exactly as I planned but the end result might be better than I had imagined. I often make composite materials – plaster or jesmonite coloured with pigment combined with other materials like chewing gum and soap. These act as a kind of physical sketchbook though things change when working in different scales.

For the layered sculptures, I make a wooden crate mould that dictates the shape of the piece and cast and pour. There are hectic moments where I’m dealing with masses of material that’s beyond my control but there are also tiny details of precision engineering using materials cut by water jet. The plaster or jesmonite dropping over the cut metal or marble allow the materials to become one. I’m happy to let aspects of the materials go wild. The work is very tied up in thinking and making.

Do you make maquettes and experimental pieces? If so, do they have a life after the testing process?
I don’t make maquettes – foolishly really – I should probably make them. I have material tests and colour tests. The only things that have a life afterwards are the smaller details which have been precision cut – I decide as I go along where these best fit. 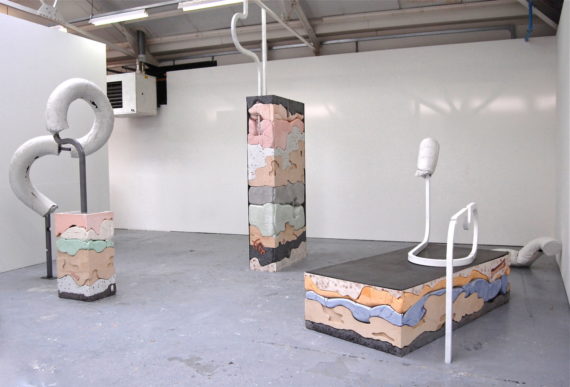 How do you arrive at your more unusual material selections? I have seen dog chews and baby lotion listed on previous works.
Dog chews are made of rawhide – a bone-shaped mould into which wet skin is pressed. They’re skins turned into cartoon bones. I try similar things with marble – simplified or enlarged versions of recognisable objects. Soap and baby lotion relate to healthcare and the improving and maintaining of our bodily surfaces; likewise, I used rock salt in one work – marketed as a luxury bathing and cooking ingredient in a weird internal and external mix-up. The materials in ‘wrot’ relate more to geology – marble, aquarium rocks and animal grave rocks.

And what’s next after ‘Wrot’?
I just installed work at GL Strand in Copenhagen. I am also part of a group show titled ‘Lightness’ at White Rainbow in March. I need some studio time to decompress, breathe and do some thinking again. 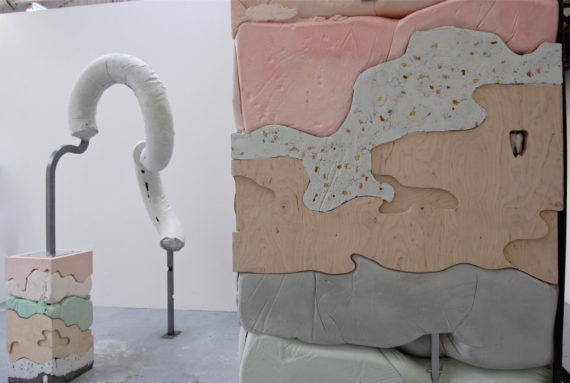 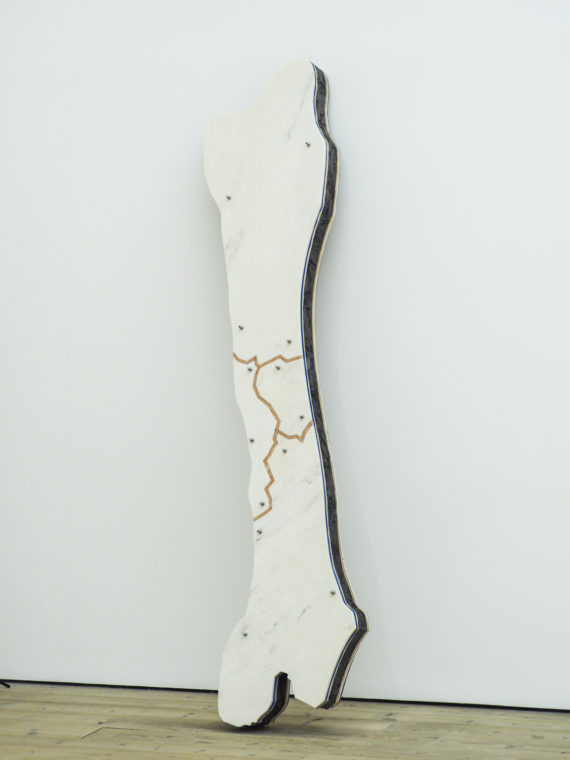 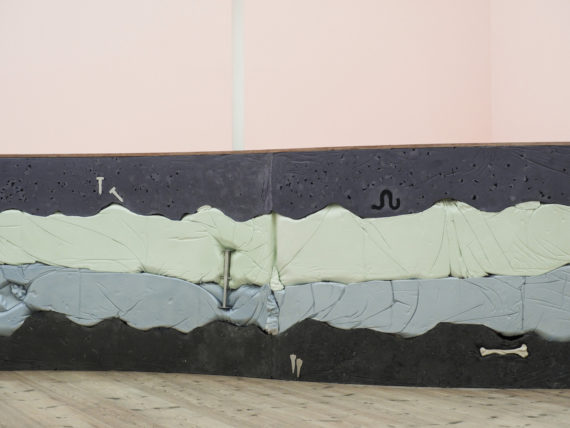