In November 2016 artist Keith Harrison was announced as the winner of Jerwood Open Forest, a £30,000 commission opportunity to produce a new public work for a forest context. He talks to Anneka French ahead of his sculpture-cum-performance, Joyride, which will see a full-size replica of a Rover 75 ‘launched’ from a ramp in the Staffordshire countryside.

Keith Harrison is aware that a car poised to plunge from the top of a 10-metre ramp is a rather evocative image. It conjures up daredevil endeavours, rollercoasters and potentially criminal misdemeanours. But this image is also provocative because the car in question is a full-size replica of a Rover 75, the last model to be produced at the Longbridge car plant in south west Birmingham before its controversial closure in 2005 and subsequent relocation to China.

The closure of the plant had significant social and economic repercussions and gave the area something of an identity crisis. These contexts, along with other ideas of production, place and biography, feed into Harrison’s £30,000 Jerwood Open Forest commission, Joyride.

Twelve years after the demolition of the car plant and the erection of hoardings that sealed the old factory site from the public, the area is nearing complete refurbishment. Longbridge now has a town centre for the very first time and large-scale investment in local retail and education sectors have revitalised it. 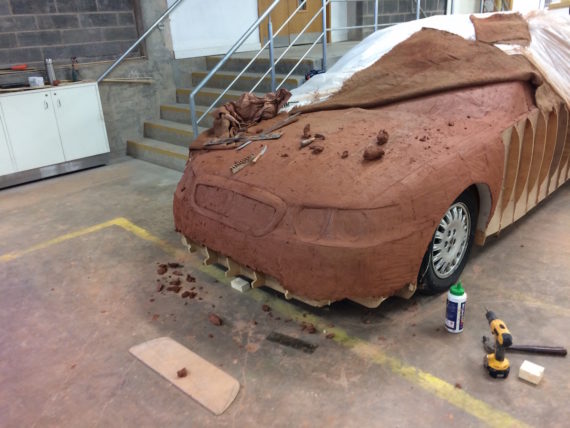 It is here that the Plymouth-based artist, who grew up in nearby West Bromwich and whose own mother and grandfather were employed at the plant, has been producing the replica of the car in polystyrene, steel, plywood and clay. Using a temporary production facility in a basement workshop of Bournville College, also on the old plant site, Harrison has been helped by Anthony Tovey, an expert car-modeller who worked at the Longbridge plant.

There are many layers of history in the mix but Harrison is keen to stress that the narrative of Joyride is not one of decline and destruction. Rather, he views the project as the start of something; a ‘launching’ process.

“The car will be craned into position at the top of the ramp,” he explains. “We are planning that it will fly once it hits the bottom of the ramp. Of course, the parameters will be set so that it’s safe and it will be brought to a stop with crash barriers. How the car will behave is a little unknown. It is a test. I’m hoping it will have the atmosphere of a rocket launch, including all of that build up and uncertainty.”

While the vehicle has been built on the site of the old plant, its performative release from the ramp takes place 40 miles away in Staffordshire, in Cannock Chase Forest’s Tackeroo site.Joyride brings these two very different sites into collision with one another. 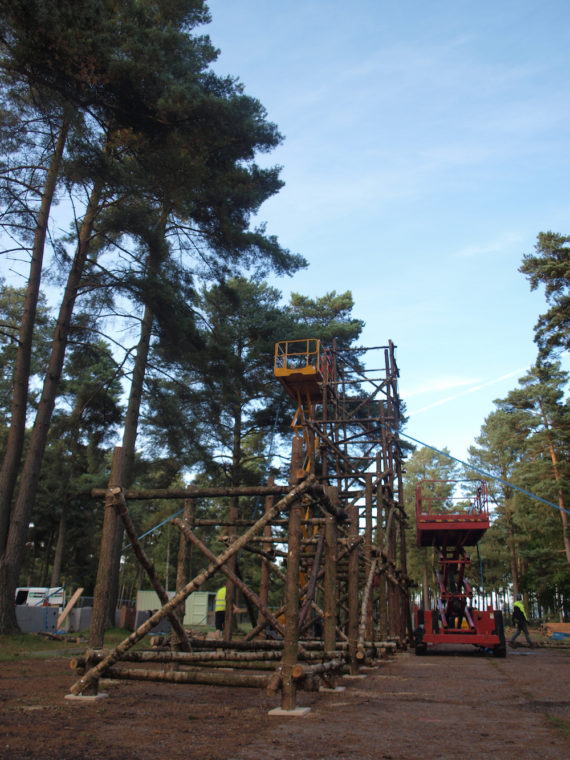 While seemingly incongruous, Harrison notes: “There is a clear narrative of the Midlands’ role within the UK car industry. And I had this idea of a joyride in a forest in my mind. The car is connected to how you arrive at a forest and how you use it in day or night. When I was young, Cannock Chase seemed to be a kind of wilderness area that we visited as a family. There are a lot of personal connections I made between [the two sites].”

The materials used within the making of the car and its ramp bring together these disparate sites too. Rather than use a smooth, pliable modelling clay, Harrison has sourced clay from the area close to his parents’ home, from the banks of a river which also flows through Longbridge.

“The clay is taken from the route of the River Rea – from major road works going on in my parents’ road in West Bromwich. It’s lumpy and hard to work with; very rough, with lots of debris. But it’s important that it comes from this place.”

Harrison’s making process started with high-tech 3D scans of the Rover 75 in the absence of its working drawings. A latticed plywood frame similar to the structure Harrison used for his 2015 Plymouth breakwater commission, Heavy Rock, has been laser cut and assembled. This is the skeleton on to which the clay has been applied by hand.

The 10-metre ramp is constructed from ‘thinnings’ sourced from Cannock Chase – smaller trees that are removed from forest areas in order to allow sufficient resources for larger specimens. Harrison likes the idea that both the clay and wood from the thinnings are discarded materials that will return to the ground – going full circle over time in a manner similar to the skills and technologies he is working with; perhaps even the sites themselves. 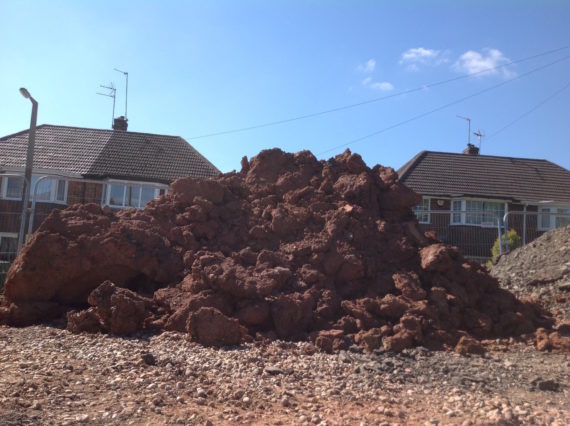 On the evening of 30 September, audiences are invited to Tackeroo by car. Harrison has integrated this into the event. He is developing a radio station called Joyride FM which will play a two-and-a-half-hour soundtrack devised by artist Carl Slater. He hopes that car radios and car headlights will contribute to the audio-visual display of the project, enabling audiences to play a key role in the atmosphere and action of Joyride, “entering into the spirit of it”.

Harrison says: “This is ambitious, large and temporary. I’m so pleased that all the parties involved have been so open to ideas and to take a risk on this. I’ve never done anything outside of an urban context before, so this has been a chance to push and to see what these materials are capable of.”

There is, he admits, the chance that it could go wrong. “I don’t know exactly what is going to happen when the car goes down the ramp. The pressure is for an amazing launch but there is no second chance.

“I just have to hold my nerve and get the car to the release point. That will be a success. The audience is invested in the uncertainty of it with me and I’ll be part of the audience, just watching. The agony of this is part and parcel of the project.”