Featuring a new body of work made this year and at the end of 2018, ‘drye eyes’ is Glasgow-based artist Lauren Gault’s first solo exhibition in England.

Showing at Grand Union, Birmingham, the exhibition is composed of seemingly disparate forms and materials that attempt to disrupt themselves or to reconceive the spaces around them.

These are joined by a large metal sculpture that uses a sheet of steel roofing studded with transparent silicone, smaller ‘hidden’ sculptures, a fragmented sculpture that cuts variously through the space (at hip height and just above eye level) with sharp steel bars and stitched neoprene.

The exhibition also features a sound piece that pulls together strands of Gault’s research and production processes. 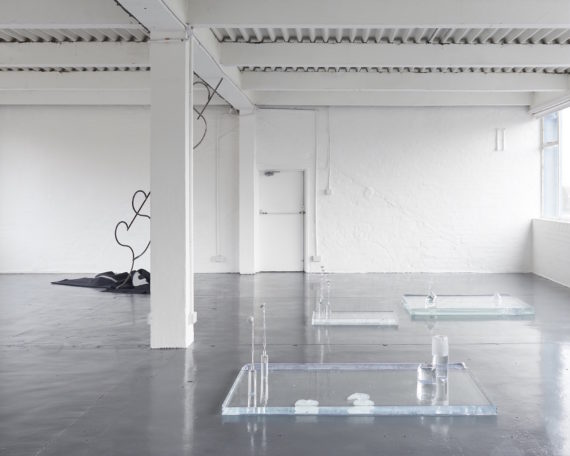 Tell me about the exhibition title, ‘drye eyes’.
I’ve previously had a corneal injury. I had my eye anaesthetised and was really aware of the spherical physicalness of the eye. But the phrase ‘drye eyes’ in my working and thinking is about tolerances of materials and their capacity to hold language. I’ve been drying and re-wetting materials as a way to re-write a different narrative for them. I’m also drawn to acute scenarios where materials butt against each other – oil and water, beached whales, midpoints – and to the process of seeing. ‘drye eyes’ is an umbrella term for these threads of thought. Whenever I say the phrase, I really think about it but I wanted to offset that particularity by adding an ‘e’ so the word became more like an image, reflection or name. These works don’t have individual titles, just the title of the show.

How much of the work have you made at Grand Union? Was much constructed beforehand?
A wee bit of both. I don’t like to make stuff which is setting a scene. I spent a lot of time in the space on site visits before I started making so I had an idea of what the space was doing and the different frequencies I wanted to tap into. I made a series of things that are fairly modular so that I could make them tighter or expand them, working with a glass blower in the chemistry department at the University of Birmingham called Steve Williams. I’d never worked with the material before in the way he was working with it.

How so?
In standard glass blowing you pick up the glass, blow it and construct a shape. But he works with glass in a way that’s more like metalworking or woodworking. He starts with a stock form like a clear cylinder and turns it on a lathe. It’s opened up a new, expanded way of what I understand glass to be able to do. 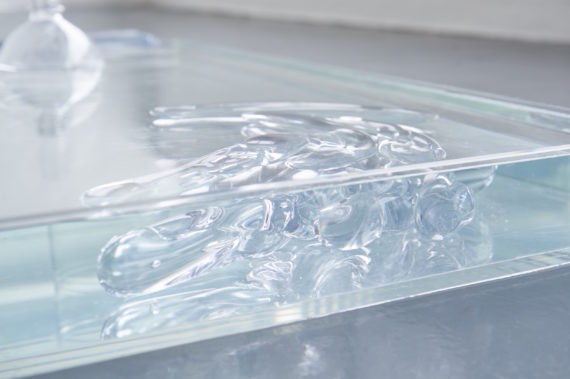 How have you approached the specificities of the gallery space?
I wanted to play with its dimensions to breakdown interior/exterior. The large flat glass pieces relate to the size of Grand Union’s windows and I wanted to work with different heights structurally – where a girder might meet a wall – as a way to make the space feel elastic through how these things engage with it. It’s blurring what’s already here and what these new things are, giving them an agency.

Your iron pieces are similar in dimension to the gallery’s pipework …
Some of the references are more subtle. It’s an amazing space – a rooftop landscape, flanked by windows and you can see so much activity outside. It’s got a really particular mood. The metal pieces are screwed into the floor and walls and the salt dough pieces painted into the wall so that they are a little hidden.

Is the work political?
The material encounters we have are often digital, linear and directed. The scenarios I have made have more bodily or psychological reactions. Exploiting that feeling is becoming more important politically and ecologically. How we might slow this down and re-visit material readings is really important as an amour against everything else that happens in the world. Some of the pieces here are glass, or water or gel-filled PVC. There is a play on what something actually is versus what you might think it is. 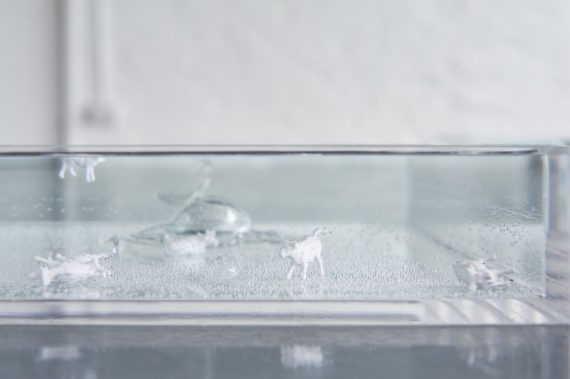 The small cows embedded in one of the glass sculptures are colourless to allow for potential. I’ve been playing with scale. I think agriculture is something that’s pulled into your consciousness and pushed away through food and diet. A lot of things in the exhibition materially or figuratively reference that system – agricultural lime for instance. Agriculture and seeing are such huge systems – I’m trying to find where they touch or where you can catch an element of them momentarily. The sound piece incorporates sounds of the glass being made and also a bull kind of roaring? It sounds like Jurassic Park – it has this weird past, present, future thing going on but it’s something so ordinary.

Can you tell me about the medical aesthetic – the cleanliness and transparency?
Glass has its own associations. I was initially really drawn to transparency because you’re really just dealing with form. I find transparency really odd.

Nothing ever is transparent.
It’s an illusion and the context changes the object so much.

I’m desperate to poke the water and gel-filled cylinders.
Do you want to? They’re made from welded PVC which is used in isolation tanks which have to be optically clear. The welds are entirely transparent. There are exchanges taking place here, things breathing in. I’ve made casts of chest cavities but the cold weather made the foam exhale and collapse. 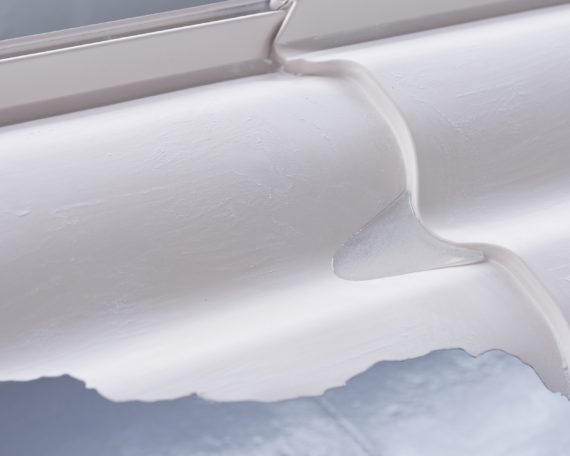 What about the roof piece?
I was struck by the roof landscape here but I’ve never worked with metal like this before. I had seen a couple of rust-eaten holes which I’ve replicated and I wanted the piece to have a floating, mid-height that felt like it disrupted top/bottom, above/below. I made about 20 of these as it was completely new and I didn’t know if I was going to like these things. I’m using one but I still don’t know how I feel about it even though I know it’s important. The little bits of silicone make the rooftiles look a bit weepy. You can get close to something you normally wouldn’t. The holes were made using a plasma cutter where you have to work blind – a nice link with the rest of the work.

And the neoprene and iron piece?
I always wanted to make a stretched out, industrial, figurative kind of form that could almost cut through a surface, interrupted in the process of doing that, and thinking optically about how your eye might anticipate what was supposed to happen in the midpoint. I wanted it to physically engage with the building, cutting through it. It’s part of the unsettling of liquid/solid and surface/floor that I want to affect you in a bodily reading of the space.

It’s quite aggressive.
Yes it is. But the neoprene form is a mid-dimension between an average person and a pilot whale. In the north of Scotland, 10 pilot whales were stranded but they looked unsettlingly to locals like divers in wetsuits. I was thinking about that image. The more you know, the more associations you make, and I’m trying to keep things fairly open. It’s high risk, high-vulnerability work but you still have to do it. 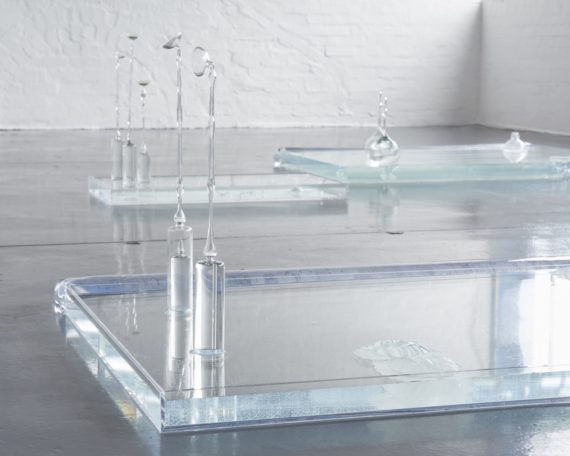