MOT Projects’ current exhibition investigates the uses and possible abuses of written, spoken and constructed forms of language. Curated by Cicely Farrer and John Bloomfield, ‘Objective Considerations of Contemporary Phenomena’ displays works that test language as a malleable material for art making. Through new commissions and existing works the exhibition particularly utilises the form and content of language as it approaches failure, for instance the ‘sonic clutter, verbal excess, the unsaid, euphemism and lying’ amongst other personal and political interpretations of the subject.
The heavy drum pedal which forms part of Patrick Goddard’s installation ‘Money Talks and Money is Cheap’ (2014) is particularly insistent. It beats out time. It disrupts the exhibition experience. The pedal bashes its head against the gallery wall, accompanied by a series of economic clichés spoken by the artist. Goddard’s nonsense phrases repeat over and over, and meanings are skewed or lost completely: “Maximise enterprise interfaces … factual reserve bank … falafel sandwich bonds …” he intones. Nearby is a large drawing of the Chancellor of the Exchequer, George Osborne, cast in the pantomime role of The Dark Lord of the Coin. The drawing highlights, via some of Osborne’s more outlandish speeches, how metaphors are employed politically (but not just by politicians) to obscure the truth. In such instances language is used so as to not really say anything at all.
Nina Power’s adjacent ‘Thirty-One Theses on the Problem of the Public’ (2014) is a wall text that does what it says on the paper. Power’s list examines issues relating to the concept of the ‘public’ and the ways in which this term is manipulated for various political agendas. Her work reconsiders the ‘public’ as a signifier whose signified is a mythical and rather muddy entity. It is often an entirely redundant phrase. Thesis number fourteen tells us, for example, that ‘The public library has been closed;’ number twenty-six asserts that ‘The public does not go to public schools.’
In the video piece ‘Is It the Opera or Something Political?’ (2009) by Kim Schoen, sub-clauses are connected endlessly to further sub-clauses. A woman speaks directly to camera in a constant flow of sentences without resolution. Words build up, dart sideways, slide backwards and cannot be followed, and in a similar approach to a linguistic excess, Kenneth Goldsmith’s ‘Soliloquy’ (1997), re-printed for the exhibition, records every word he spoke for one week. Goldsmith’s book documents exchanges ranging from new working collaborations to buying coffee, placing equal value on diverse, humorous, poetic and sometimes banal utterances within everyday spoken language. The work revels, too, in the almost imperceptible pauses, hesitations and repetitions inherent within speech but usually edited from written forms.
Language as material is the starting point for a new commission by Nicole Bachmann. ‘She Said, She Says’ (2014) is a hand-knitted textile hung from the gallery wall and its title is woven into the fabric of the work. Later in the course of the exhibition Bachmann will use the textile to build a performance that considers weaving in relation to the combining of speech and thought, and the linguistic choices that determine which words are spoken and which remain unvocalised. 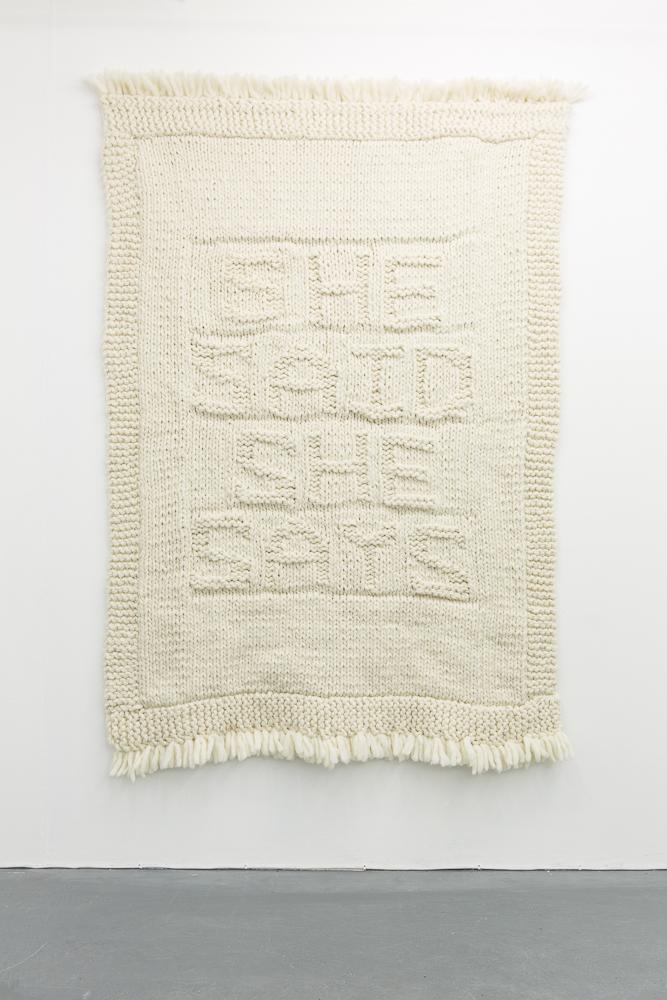 Using interview sound clips pertaining to lie detector software, Lawrence Abu Hamdan’s ‘The Whole Truth’ (2012) interrogates ‘truth’ within language. The installation specifically reflects upon connections between the body and the voice, and how one may betray the other under pressure, as the software measures the tonal qualities of the voice regardless of the words spoken. The insertion of a bench and mirror within the installation connects the viewer to the work directly, apparently questioning them. The graph on the television monitor indicates the ‘truth’ of each sound clip spoken and highlights the dubious accuracy of such technologies, particularly when used in judicial and political scenarios.
‘Objective Considerations of Contemporary Phenomena’ is a densely layered and complex exhibition. The curators have teased out a range of ideas connecting language to political, formal and material concerns that enable the visitor to re-evaluate the meaning, context, truth and impact of words on how we live and how we make art. The resulting exhibition is a nuanced body of research that considers these ideas with fresh voices.

Commissioned and published by this is tomorrow, 17 December 2014