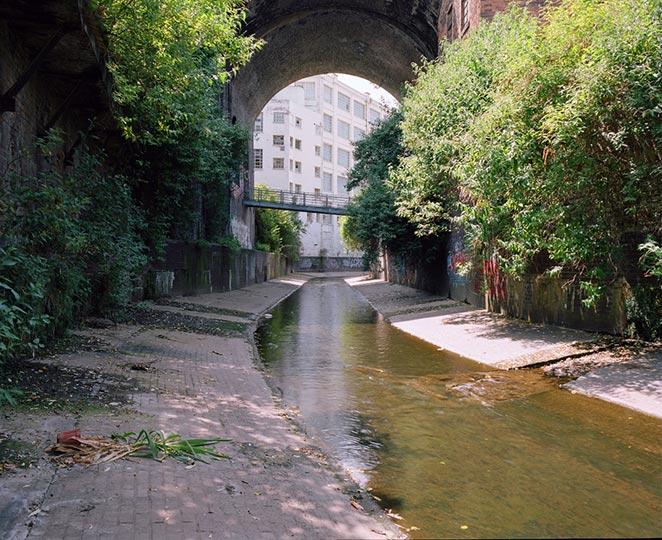 Running from Waseley Hills in Worcestershire to Birmingham’s Spaghetti Junction, the River Rea is a comparatively small river, often occluded by buildings and almost forgotten in a city more famous for its canal network. The Rea is, however, the subject of a video installation by artist David Rowan showing at mac, Birmingham. Entitled ‘The Dark River,’ the work seeks to explore and uncover facets of its unique character.

The work is a new commission for the city’s multi-sited Flatpack Film Festival, forming part of its ‘Birmingham-on-Sea’ programme. It is shown at mac alongside ‘Walk On,’ an exhibition which explores artists’ walking practice. Both frameworks seem appropriate for a body of work which has taken Rowan two years to research, investigate and develop. This is a beautiful yet odd landscape, as much of the Rea’s length is culverted and inaccessible: a semi-secret river and a series of sites to be explored.

In moving images that glow against the black gallery wall, the colours of sky, bushes and red brick structures are vivid in bright sunlight, dappled by the trees. The river narrows and widens, rushes and then pools. Two young boys play football in the water and two other people ride bicycles through shallower sections of the river. Some of the lining walls are covered with graffiti and the lush vegetation is kept wild by a lack of human intervention.

‘The Dark River’ is presented in sections including Saltley, Northfield, Cotteridge and some of the other locations it flows through via nine monitors. Each has twin speakers and all the equipment is set flush into a long black wall. In such a display, the river is opened up and presented as slices of time and space. These are shown concurrently and almost on the exact spot where the Rea flows beneath the mac. The sense of the river nearby is a powerful one, and this enables both a conceptual and physical engagement with the subject of the work. This heightened awareness of place is compounded by the almost deafening sound of rushing river water emanating from the speakers (the name ‘Rea’ means to run or flow) and the centralised perspective of each video, as if the viewer stands in the river with the artist himself.

The videos are largely peaceful, and the gentleness of the action portrayed gives them a highly photographic quality: a subtle interplay between stillness and flux which belies Rowan’s photographic background and previous work investigating other of Birmingham’s secret or lost waterways, mines and bunkers. These notions have particular resonance given how much of the city’s history is being erased in the relentless forward march of progress.

Rowan’s slices of time and space allow for a kind of distillation or preservation of these fleeting moments within the Rea’s course. Ultimately, the thing that makes this installation most engaging is its specific context. The river must be crossed to enter and exit mac, and therefore when viewing Rowan’s work, the Rea runs just a few metres away from one’s feet.

First published on this is tomorrow 25 March 2014